Everything you need to plan. Best spots and photography tips. 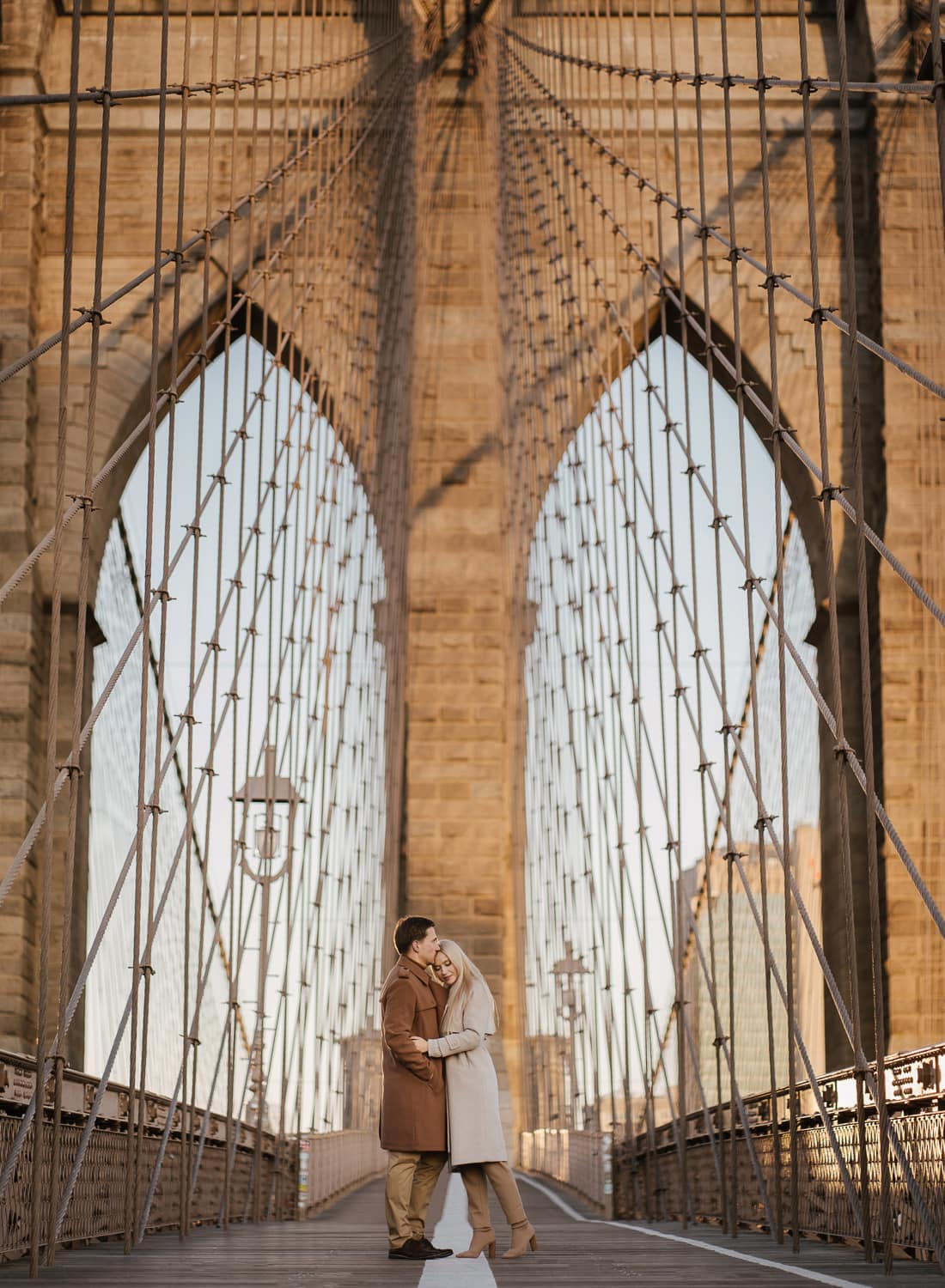 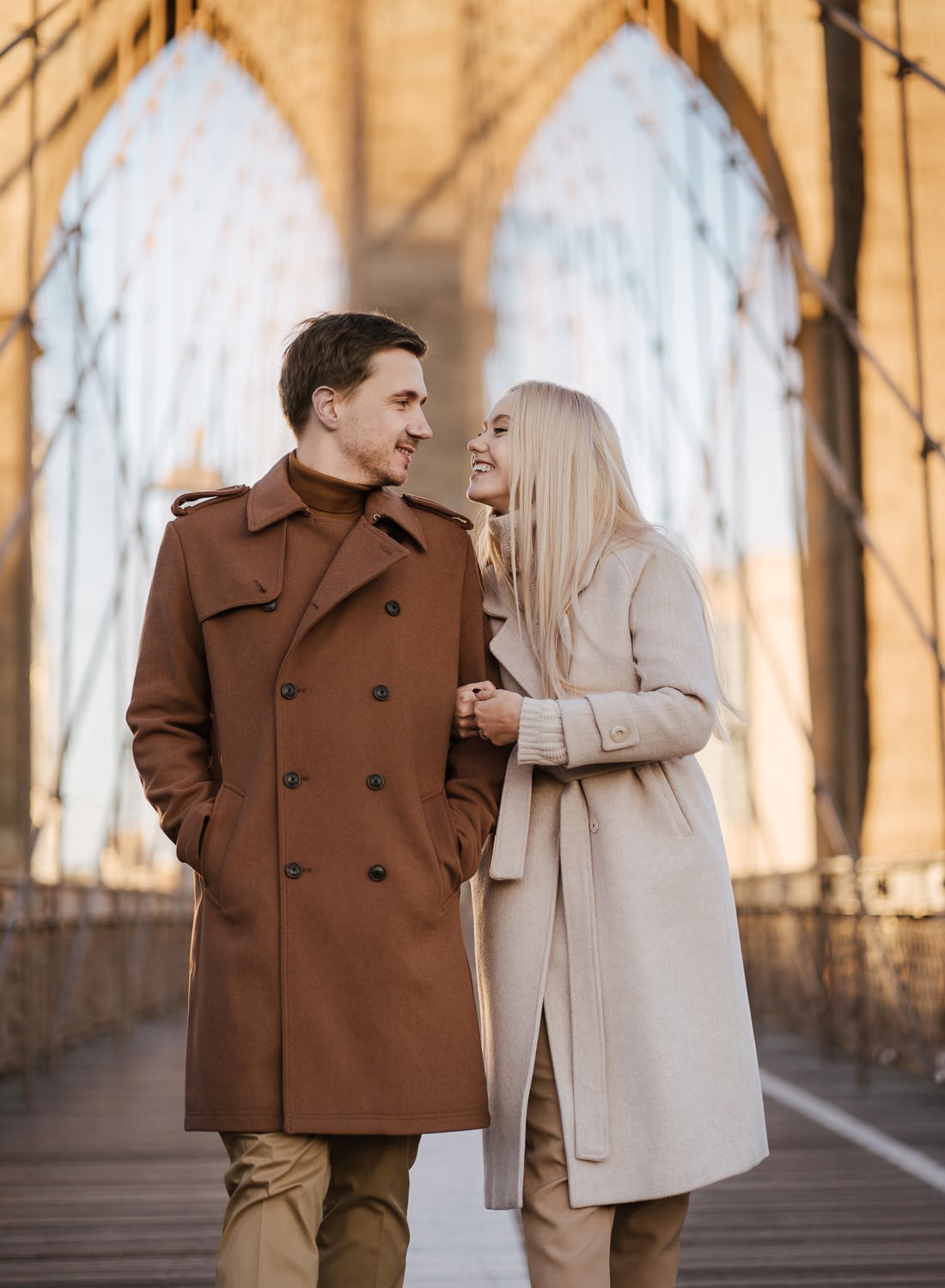 If you asked most people to name a famous landmark in New York City, you would likely get one of three answers: The Statue of Liberty, The Empire State Building, or The Brooklyn Bridge. Spanning the East River to connect the two largest boroughs of New York City, Manhattan and Brooklyn, the Brooklyn Bridge is just as important to infrastructure as it is to the culture and identity of NYC.

TripAdvisor named the Brooklyn Bridge one of the most romantic destinations in the United States. Couples from all around the world have added engraved padlocks along the bridge to symbolize their love. Whether it is a loving embrace on the bridge or a romantic picnic in Brooklyn Bridge Park, there is no shortage of romantic scenes to be found here.

The bridge is a perfect place for those who want to plan an unforgettable proposal or have engagement photos taken in the Big Apple. With the Manhattan skyline or the iconic architectural design of the bridge as the backdrop in your photos, you will be sure to have pictures to be proud of forever.

How to Get to the Brooklyn Bridge 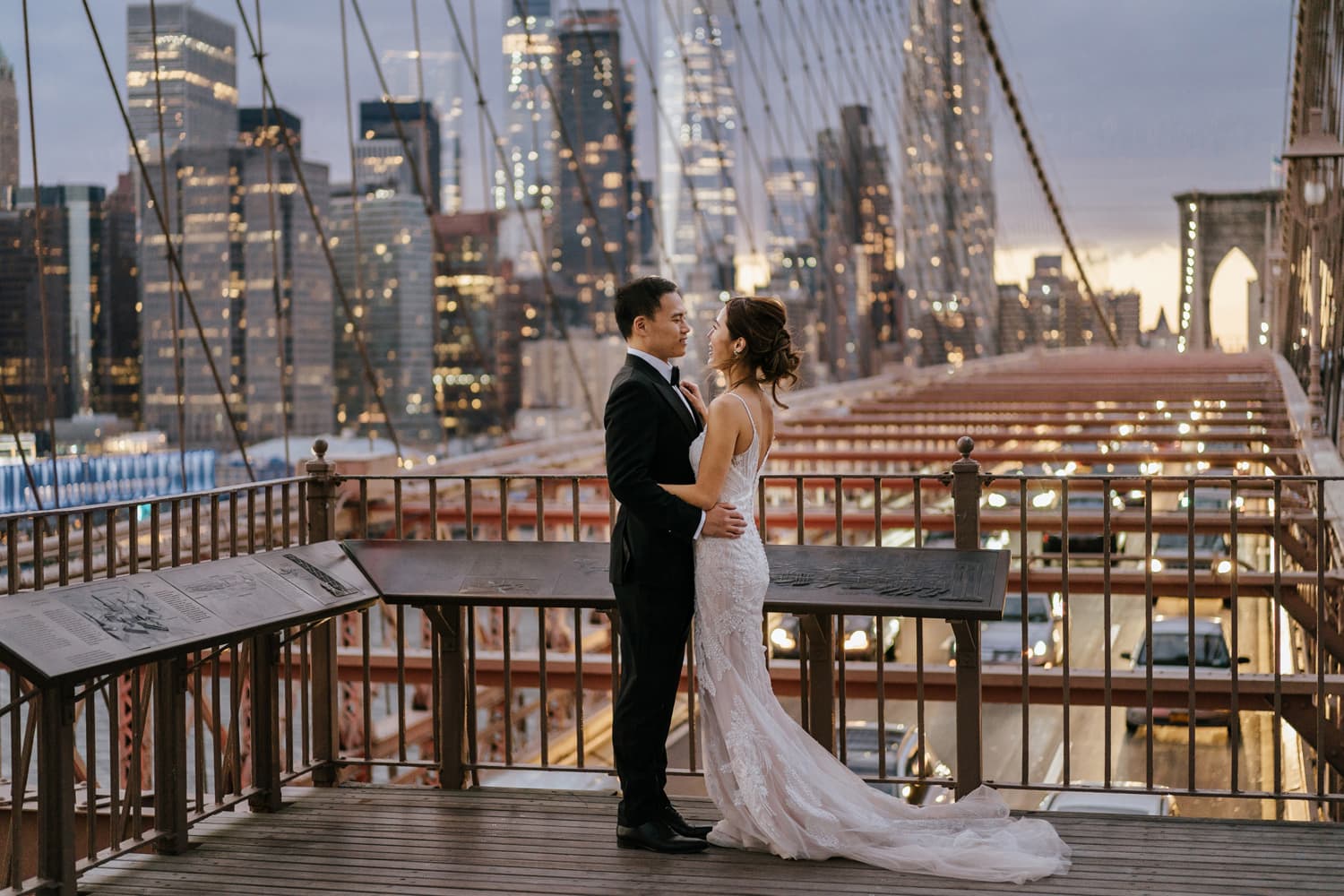 Luckily, getting to the Brooklyn Bridge is pretty easy from both the Manhattan and the Brooklyn sides. The pedestrian walkway will be where you take your pictures if you do them on the actual bridge. Previously, bicyclists and pedestrians could get a little hectic because their respective lanes had no physical barrier, so foot and bike traffic would often mix and become a mess. As of September 2021, the bike lanes were moved to a different level of the bridge, so this helps reduce some of the traffic and keeps everyone safer.

You can find access to the walkway in Brooklyn near the corner of Washington St. and Prospect St. There will be a stairwell built into the side of the underpass that will take you up to the bridge. Walking the bridge from this direction will give you the best views of the Manhattan skyline.

Google maps directions (the Brooklyn side)

Planning from which direction you want to take your pictures is essential. The bridge is a little over 1 mile long when traveled by foot, so to avoid getting sweaty from walking across the bridge, just plan ahead and start from the side that will suit your plans the best.

Best Time of the Day for Brooklyn Bridge Photoshoot 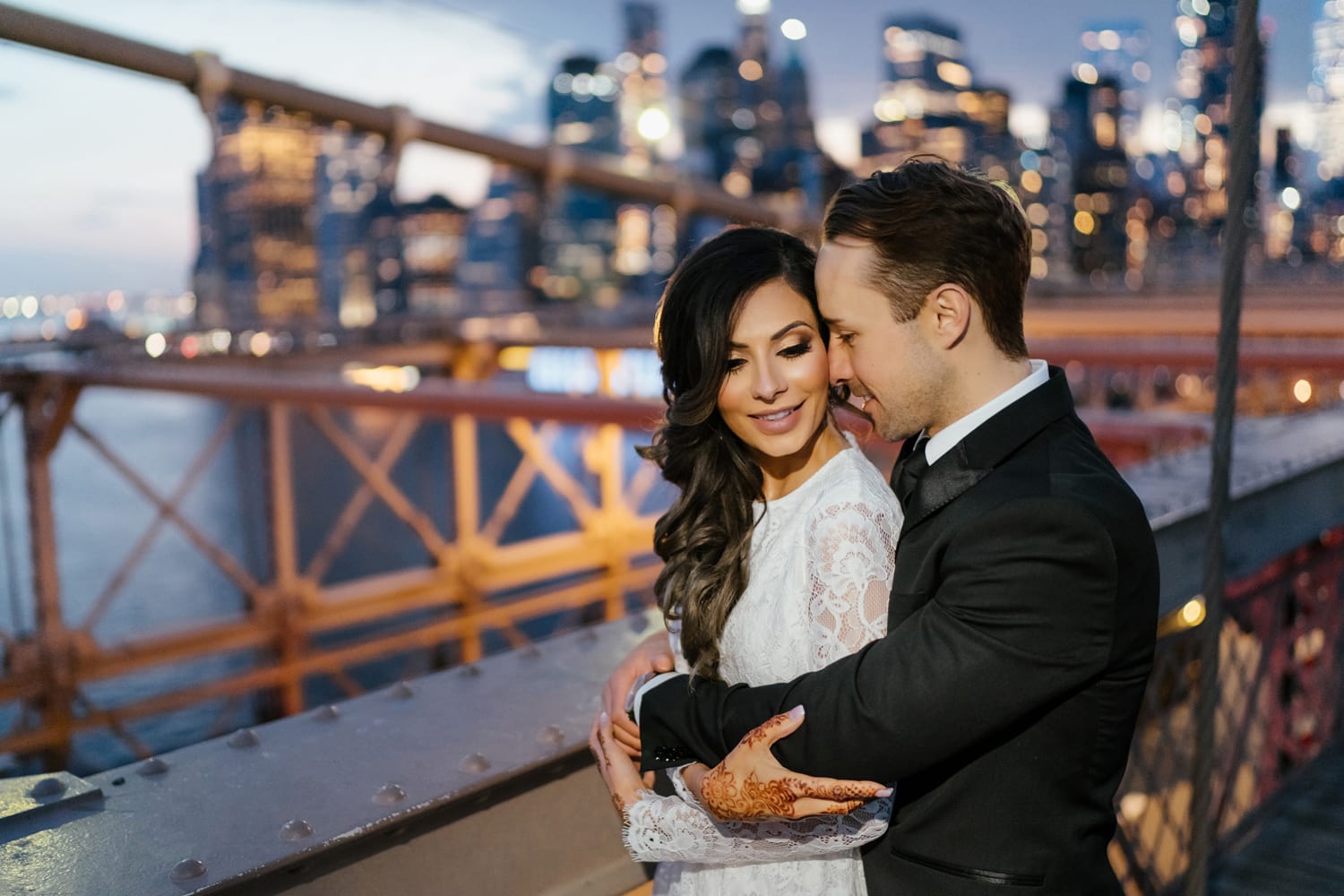 The best time of day to shoot photos on the Brooklyn Bridge will be early in the morning, during or just after the sunrise. Since the sun rises in the East, it will rise above Brooklyn and light the scene with that perfectly soft and warm light that we all know and love from the sunrise. Shooting from this direction will also put the Manhattan skyline in your background, which is typically preferred.

Another benefit of shooting at sunrise is that there will be fewer people on the bridge. Since the bridge is so well known, it attracts thousands of tourists every day. Typically, tourists don’t flock to the bridge until a little later in the day, so sunrise is a perfect time to avoid the crowds. If you are a little nervous about posing for photos, it will be easier at times when there is less foot traffic.

Shooting with the harsh light during mid-day can be a challenge. This time of the day will also have peak crowd size so if possible, try to avoid shooting during the daytime hours.

If you don’t want to shoot in the early morning or if you want to show the sun setting behind the Manhattan skyline, then sunset can be a good option. There will almost certainly be many people on the bridge because sunset is the most popular time for tourists to visit. Friday, Saturday, and Sunday will be the busiest days, so avoid those days if possible.

Another benefit of a sunset shoot is that once it gets dark, the lights of the Manhattan skyline will provide a breathtaking backdrop.

What to Wear for Your Brooklyn Bridge Engagement 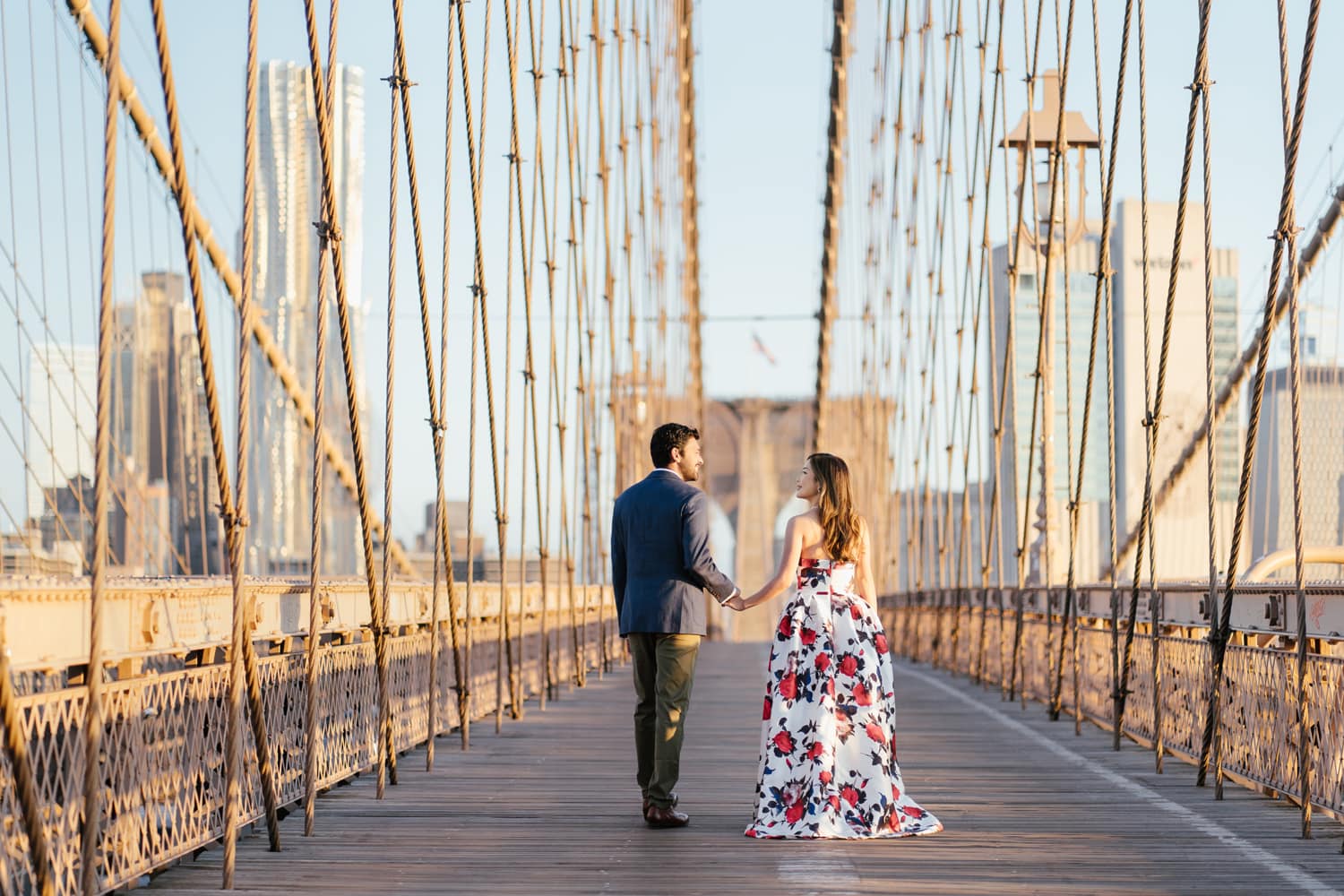 Of course, you should wear the outfit that you want to have in your pictures. But, there are some things that you should consider when deciding what to wear.

The weather on the bridge can be cold and windy, especially in the colder months during sunrise or sunset. If your outfit is not warm enough, you should bring something to stay warm during the walk and in between shots. Wearing layers is a good idea if you get too hot or cold during the walk or while you are waiting.

Another thing to consider is your shoe choice. The pedestrian walkway is made of wooden planks with small gaps that could be uncomfortable if you wear high-heels with a stiletto style or similarly narrow heel. It would help if you went with a wider heel or brought another pair of shoes to wear while walking along the bridge (or before you change them for photos). 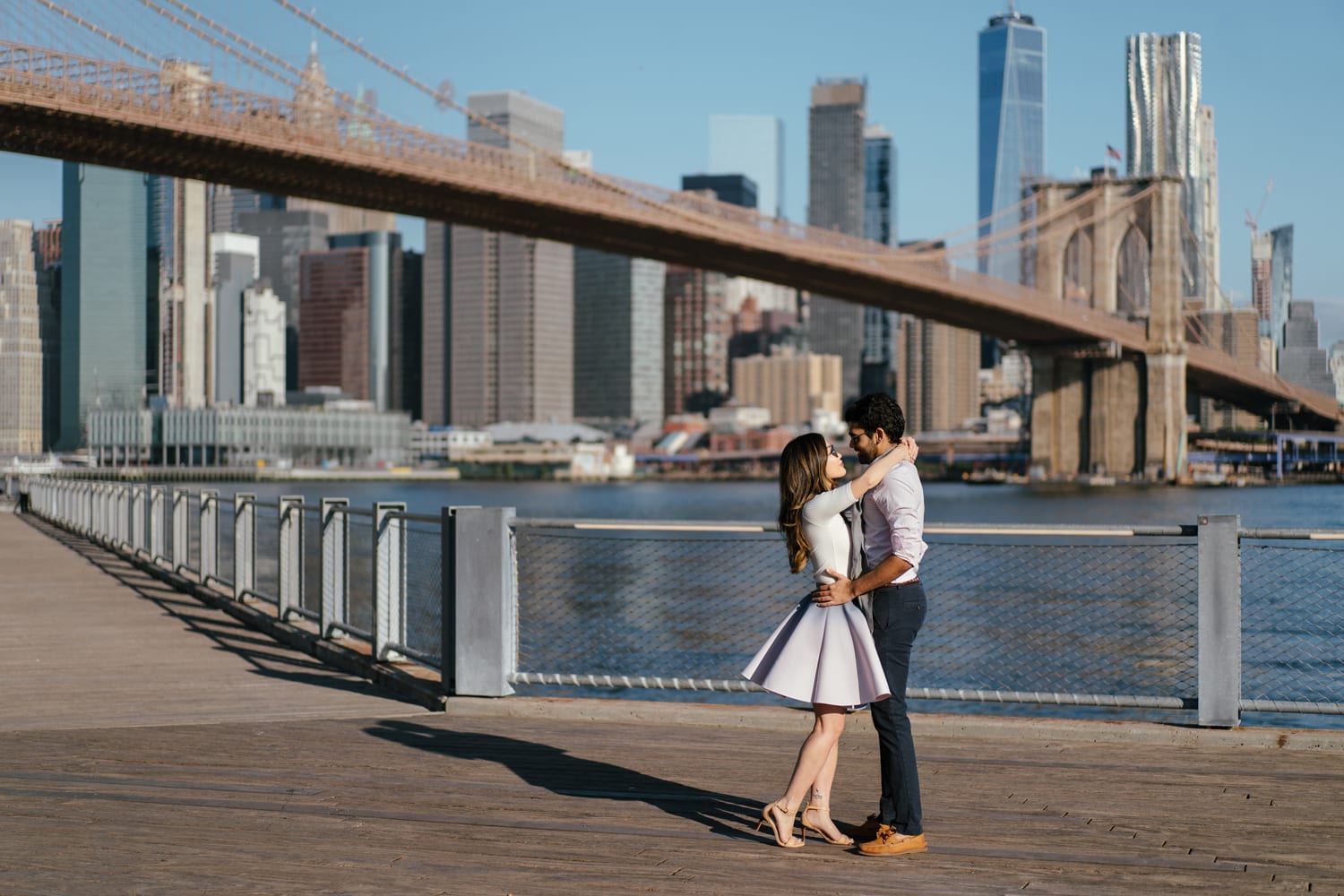 DUMBO is an acronym for Down Under the Manhattan Bridge Overpass, which is an area in Brooklyn. Adding a stop in Dumbo during your Brooklyn Bridge engagement photoshoot is definitely worth the time. You will find views of the Manhattan skyline, the Brooklyn and Manhattan Bridges, gorgeous cobblestone streets, and plenty of romantic spots to find where you can get perfect engagement photos.

We will discuss a few popular spots that you may want to visit during the photoshoot. Keep in mind that you will do a bit of walking in Dumbo, so bring some extra shoes so you don’t have to try to conquer cobblestone streets in heels. Restrooms are also scarce so if you need to do an outfit change, try to plan ahead to make sure that you pass one on your route.

Where to Eat in Dumbo after Your Session

One of the first things that come to mind when someone mentions NYC food is pizza. Two of the best pizzerias to get a New York slice are located in DUMBO, right next to each other! Grimaldi’s located at 1 First Street and Juliana’s at 19 Old Fulton Street will both deliver a classic New York Pizza Experience. Try one, or grab a slice from each and see which one you like better!

Although we aren’t in Boston, we are still in the North East, and that means Lobster Rolls should definitely be on the menu! Luke’s Lobster Rolls is located in Brooklyn Bridge Park near Jane’s Carousel. Offering fresh lobster rolls, soups, salads, and more, this is a great place for some classic North East seafood. You should note that they are closed during the winter months.

Are you planning a Brooklyn Bridge and Dumbo engagement photoshoot? Get in touch, this is going to be great! 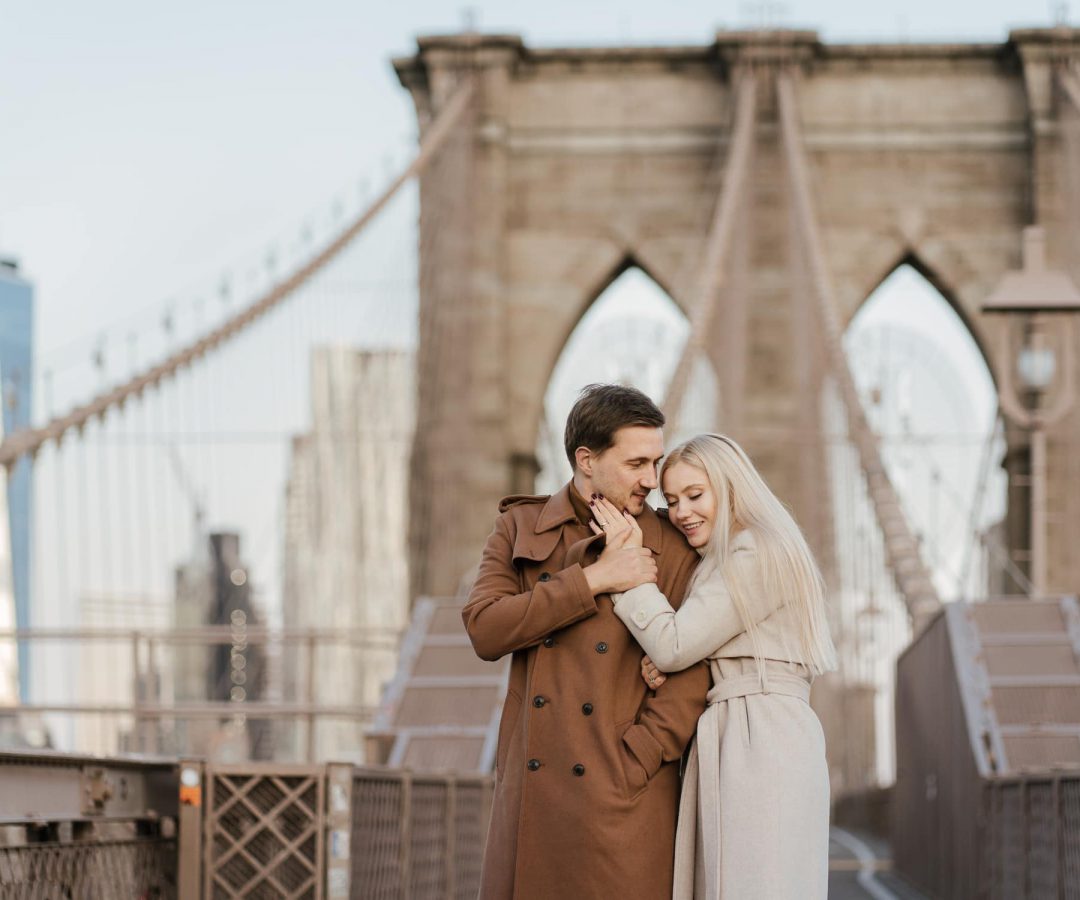 @lapkovsky
A few photos of recent engagement session in Centr

Lovely photoshoot in Central Park a few weeks back

Definitely one of my favorite places in NYC 🖤